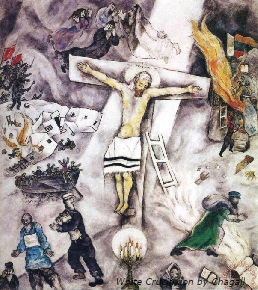 They compelled a passer-by, who was coming in
from the country, to carry his cross; it was Simon of
Cyrene, the father of Alexander and Rufus.
Mark 15.21

Marc Chagall painted his White Crucifixion in 1938, reflecting the Nazi persecution of the
Jews at that time. Jesus is depicted as a Jewish martyr and all the elements in the painting
depict the violence and destruction being inflicted on the Jews of Europe. Many of the
people depicted are nameless, but represented real situations and real lives unfolding.
Ordinary people, living ordinary lives. And in a heartbeat, those lives changed – destroyed
by an evil that is still unimaginable to grasp.

In Mark’s account of the crucifixion of Jesus, the first verse of that section opens with “They
compelled a passer-by, who was coming in from the country, to carry his cross; it was
Simon of Cyrene, the father of Alexander and Rufus.”

We know nothing about Simon other than he is from Cyrene and he is the father of
Alexander and Rufus. We don’t know why he was in Jerusalem that day. Maybe he was
there for the festival. Mark doesn’t say. He appears suddenly, and disappears just as fast.
Note a couple of things about him though: the cross was not something he chose, but
something that was given to him and; the cross was placed on his shoulders because some
Roman soldier spotted him, hauled him out of the crowd and compelled him to carry it.

Nameless faces in a crowd. Yet well within Jesus’ love and salvation as offered in the
expanse of his outstretched arms.