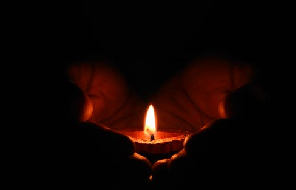 Is it nothing to you, all you who
pass by? Behold and see if there
is any sorrow like my sorrow.”
Lamentations 1.12a

The office of Tenebrae (Latin for “darkness” or “shadows”) comes from the ancient monastic
night offices – those offices that are said at midnight (Matins) and mid-way through the
night (Lauds – early morning). My Lenten discipline has been, for some years now, to rise
at midnight and 3am to pray those two offices, when the rest of the world sleeps.
Tenebrae would be said in those night offices on the last three days of Holy Week –
Wednesday, Thursday and Friday. Saturday of course, would see the Easter Vigil, and the
night offices in the predawn hours of Sunday would be very much Easter centred.
The offices are made up of psalmnody combined with a variety of readings, both scriptural
and doctrinal. In the first office, the Lamentations of Jeremiah form the lessons – texts we
know as the Reproaches which we hear in one of the anthems on Good Friday. Much of the
office is traditionally chanted, and the psalms and responsories alternate steadily from one
side of the “quire” to the other, each side of monks or nuns picking up where the former let
off.
The Lamentations of Jeremiah eloquently depict the agony of Jesus as he hung upon the
cross. All of the promise, all of the gift that God had provided is scorned.
During the full three nights of Tenebrae, fourteen of fifteen candles are gradually
extinguished, symbolizing the increasing darkness that is about to fall. The fifteenth candle
is hidden as the final canticle – The Benedictus – is chanted. Then the community as a
whole recites Psalm 51. Then sits in darkness until the officiant recites the final collect.
After which, a loud noise is made, and finally the last candle is returned to the altar in
silence.
But here’s the thing. The final psalm at Lauds, just before the final canticle, is Psalm 150.
This is no penitential psalm. This is a psalm of praise. This is a psalm that extols God’s
power and might and greatness, and calls for all of the created order to praise the Lord.
Amidst the descending darkness is the irrevocable truth that God’s power reaches beyond
even death.
Darkness will descend in the coming days. Jesus’ passion and crucifixion must be faced.
Because it is part of the greater story, the greater story of a God who loves us so much that
he is willing to be in the midst of our darkness.